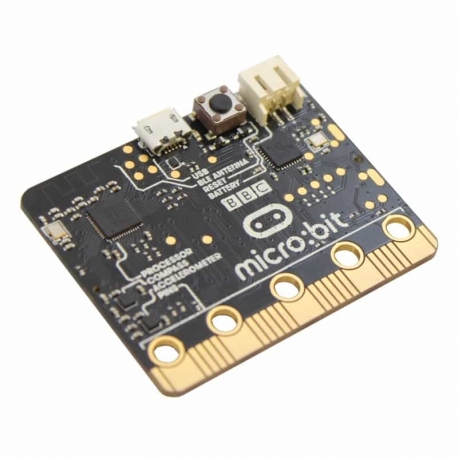 BBC micro:bit (Board Only)

The BBC micro:bit is a pocket-sized codeable computer with motion detection, a built-in compass, LED display, and Bluetooth technology built in.Each element is completely programmable via easy-to-use software on a dedicated website (www.microbit.co.uk) that can be accessed from a PC, tablet or mobile.

This is a single BBC micro:bit with no accessories, sealed in an antistatic bag. Your BBC micro:bit will come in one of 4 colour schemes, unfortunately it is not possible to specify which colour you will receive.

The BBC micro:bit is a powerful handheld, fully programmable, computer designed by the BBC and a number of partners to encourage children to get actively involved in writing software and building new things that will be controlled by it. Write your code using one of the easy to use editors provided on the BBC micro:bit website, connect your BBC micro:bit to your computer via USB press the compile button in the editor and then drop the downloaded file directly onto your BBC micro:bit. There is also an app for Android devices.

Wirelessly connect and interact with the world around you. Use Bluetooth Low Energy to connect to mobile phones and tablets, take a selfie or drive the music in your playlists.

The BBC micro:bit is the spiritual successor of the BBC Micro of the 1980s, which itself introduced a generation of children to computing. The BBC micro:bit carries on this 30 year tradition and does it 18 times faster and is 70 times smaller than its predecessor.

Based around a 32 bit ARM Cortex-M0 processor, the BBC micro:bit also features on board accelerometer and compass sensors, Bluetooth Low Energy and USB connectivity, a display consisting of 25 LEDs, two programmable buttons and it can be powered by either USB or an external battery pack. The device inputs and outputs are through five ring connectors that are part of the 21-pin edge connector.

Note: Due to Country specific trademark restrictions there may be some Countries that we are unable to ship the BBC micro:bit to. In the unlikely event that this occurs we will fully refund your purchase.